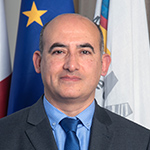 Ing Louis Aquilina is a warranted engineer with extensive experience in problem solving techniques, team building, manufacturing management, and cost reduction. He read for a B.Elec.Eng (Hons) (1982-1987) at the University of Malta, an MSc Electrical Engineering (Telecommunications) (2000-2003) the University of Malta, and a PGC in VET at MCAST. Ing Aquilina worked as an engineer, senior engineer, section manager, and operations manager at STMicroelectronics Malta Ltd from 1987 to 2008, then moved on to General Soft Drinks Ltd where he worked as the Production and Quality Manager from 2008 to 2009. He joined MCAST as a lecturer in 2009 and progressed to senior lecturer until 2014 when he took up his post as Director. Ing Aquilina is actively involved in engineering education; robotics, sensors, electrical engineering, PLC application and programming, and quality and business improvement. In 1995, as team leader at ST Microelectronics, he was awarded the Best Team Gold Award (ST Microelectronics Worldwide). His interests include walking, jogging, trekking, swimming, playing chess.