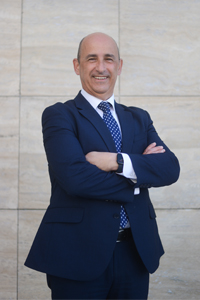 Stephen Vella was educated at Savio College, Stella Maris College, the University of Malta and Falkirk College of Arts in Scotland. He furthered his studies at Henley School of Management, where he obtained his MBA.

Through his vision and dedication to vocational education, the student population of the Institute had grown exponentially, giving him the opportunity to create and establish new courses. This opportunity spearheaded the launch of new Higher Diplomas, new Degree courses in Fine Art, Interactive Media, Photography and Media.

In 2015, he was assigned the headship of the Technical College at MCAST. In March 2017, he was appointed as General Manager at MCAST Gateway to Industry, the commercial arm of MCAST. During the past four years, Stephen Vella was very active in promoting MCAST and its brand beyond our shores. He attended various high key international fairs and conventions to attract students to further their studies at MCAST.

Stephen Vella has been directly involved in many European-funded projects and has also represented MCAST and Malta in various international conferences and seminars dealing with vocation education. Stephen Vella has acquired experience at various levels within the MCAST structure during the past twenty years. He has worked both in an institute as well as in a corporate function.