Contrary to what has been written in the media, marine heat waves are a common phenomenon in the sea around the Maltese Islands. As in the rest of the Mediterranean Sea, these extreme sea temperature events have occurred in the past, only that in recent years they have become more intense (higher temperatures), longer duration, and more frequent. A rise in water temperature is classified as a marine heat wave when the sea temperature remains above the climatological 90th percentile for more than five days. 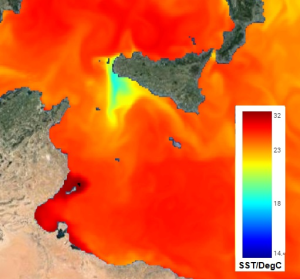 Under the direction of Prof. Aldo Drago, the oceanography section within the Institute of Engineering and Transport (IET) at the Malta College of Arts, Science & Technology (MCAST) is keeping an eye on the current surge in sea temperatures that have become a recurrent occurrence each Summer, in particular towards the end of July and beginning of August. Access to satellite data provides elaborated synoptic views of the variability in space of the sea water temperature at the surface. In addition to numerical models, these data provide a means of predicting how the sea temperatures are expected to evolve in the coming days.

The sea is not a single water body, and its dynamics lead to substantial differences in temperature, depending on location. The picture shows the sea surface temperature in the Sicily Channel on 3rd August at noon. The offshore waters around the Maltese Islands are still below the 30°C threshold; the water in the Malta-Sicily Channel remains relatively cooler than the upwelled water on Adventure Bank, in the southwestern shelf of Sicily, is advected towards the east. The latitudinal rise in sea temperature is evident towards the south, where the water reaches close to 32 C in the Gulf of Gabes on the Tunisian coast.

Closer to the coast, and especially inside the many embayments and ports in Malta and Gozo, the sea temperature is expected to be further warmer (no measurements are available) by about 1 °C with respect to offshore waters.

The temperature around the Maltese Islands has remained, on average, about 1.1°C above climatological levels since mid-May, and this makes the current marine heat wave the longest in history. It is not the most intense, at least so far. The maximum temperatures (except in shallow areas closer to shore) have remained below the 30°C threshold, which was exceeded in previous years. The forecast for the coming days shows an initial drop in temperature by early next week, followed by a gradual increase back to current values. Cooler waters are expected south of Gozo in conjunction with the incidence of Mistral winds that drive the upwelling of cooler waters from the bottom sea layers. The sea temperature is not expected to exceed 30°C except in a few exceptional focal nearshore areas in Marsalforn, Ramla l- Ħamra and Wied Żurrieq.

The implications and impacts of heat waves on the marine ecosystem are known, but we cannot manage and understand our local marine environment without direct measurements. Information is mainly gathered from the European Copernicus Marine Environment and Monitoring Service, but direct data are needed for local assessment at the appropriate level of resolution. Our country still lacks a permanent observing system to measure key essential ecosystem variables, including sea temperature. MCAST is engaging to invest in oceanography academically through dedicated courses and research mode by setting up targets for operational sea temperature measurements in Malta and Gozo.