Posted by Communications on July 4, 2022July 4, 2022
During the second week of May 2022,  various teams from around Europe have participated against each other in a hackathon event hosted by the Kaunas Institute of Technology (https://kitm.lt). The aim was to produce an AI-based prototype that would assist humans with improving their general quality of life by automating a given task through the use of Artificial Intelligence. 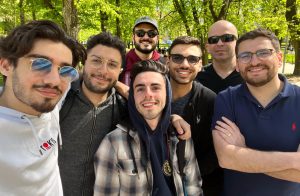 Malta represented by MCAST ICT was the winner of this event.  The winning team was composed of Kurt Agius, Gabriel Bonello, Fabian Muscat, Luke Zammit and Luke Theuma. These students have shown interest in Artificial Intelligence and Machine Learning by voluntarily attending a number of units that provided by the Institute of ICT as part of the Introduction to Artificial Intelligence project funded by Erasmus.
From a project perspective, the team had to define the functional requirements and the overall goals to be reached. After prioritizing the goals into mandatory and optional objectives, they proceeded to use a SCRUM-based approach.  SCRUM is a lightweight framework that helps teams organize themselves to address a given problem in a systematic yet adaptive manner.  The main advantage of using an agile approach is that it allows developers to re-adapt themselves in a quick and effective manner when unforeseen problems are encountered during development. 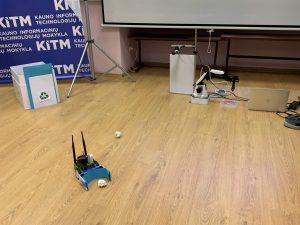 From a technical perspective it would be interesting to note that the students had to address several challenges to meet the goal of waste collection and sorting.  In terms of hardware, a Jetbot Nano (https://jetbot.org) was used to handle the waste identification and relocation and a Dobot Robotic Arm was used for the collection and sorting of the waste (https://www.dobot.cc).  Both devices were fitted with cameras that would allow the robots to look around in search of objects to identify and recognise. The hardware is the infrastructure to the code (the software) that had to be developed by the students to accomplish the core logic of the implementation.
From a software standpoint, Computer Vision (a branch of AI was used to accomplish this.  Both devices were made to “talk” through the use of an API (Application Programming Interface), this would later allow for both robots to synchronize the tasks between one another.  Additionally this API was put to good use by creating a “Dashboard” for visualising stats and logs of past activity and photos of current robot activity. This ambitious implementation did come with it fair share of problems.  There were firmware-related issues with the Jetbot setup in conjunction with the computer vision framework used.  And the robotic arm had issues both with the localisation and “range of motion” that it could affect, an issue which was later identified to be a hardware defect. What is highly commendable here is that the students tactfully worked around the problems that were encountered.
The students persevered up until the eve against all odds.  The team dynamics worked well, and it goes to prove that hard work really pays off.   While the presentation that was used on the day can be viewed here (https://prezi.com/view/4p4X0inZ2JnuhwHYF3cX/), the prototype will be on display and the team members will be present in MCAST’s upcoming EXPO (24th June 2022).  MCAST would like to congratulate the winning team and would like to thank the Kaunas Institute of Technology in Lithuania for hosting this event and Erasmus for making this project reality.