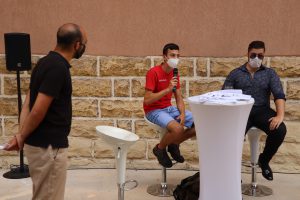 From November 2020 to March 2021, a third Debate Tournament was organised by several MCAST Initial VET Student Mentors and Aġenzija Żgħażagħ Youth Workers. The aim of this project was to continue providing young people with life skills and soft skills which would help them throughout their academic journey at MCAST.

This year’s tournament was held online via the Microsoft Teams platform. Keeping in line with the tournament’s rules and regulations, Level 3 students from various institutes within MCAST signed up to participate in groups of three. The Aġenzija Żgħażagħ youth workers provided multiple training sessions about debating techniques for the young people, while student mentors provided a briefing session to the tournament judges.

The chosen topics for the tournament varied from present local issues to broader challenging topics including, ‘STI-testing should be Offered in Maltese Schools’, ‘Censorship in Films is Necessary’, ‘Religion Should Taught in Schools’, and ‘Abortion should be Legalised in Malta’.

Throughout the debates students displayed exceptional communication skills and showed that they could still work as a team, despite pandemic related restrictions. With this year’s participants forming two distinctive teams, The Girls Team and The Boys Team, four initial rounds took place. Following the points achieved in these two rounds, two final rounds where held in which both teams competed for first place.

The last debate topics, ‘The Maltese Government should punish Parents whose Children are under a Care Order’ and ‘Integration of Immigrants in Malta positively impacts the Maltese population’ were chosen at random through lottery-style pick by the participants themselves.

During an award ceremony organised on campus at MCAST, the winning team were presented with a trophy and €240 in prize-money, the runners-up were given €100 prize-money, while every participant received a certificate of participation.

Awards were once again kindly sponsored by Aġenzija Żgħażagħ. Following a satisfactory debate tournament, the organisers look forward to plan further debate tournaments at MCAST in the coming years.